The Feminist Kaur with a Paintbrush 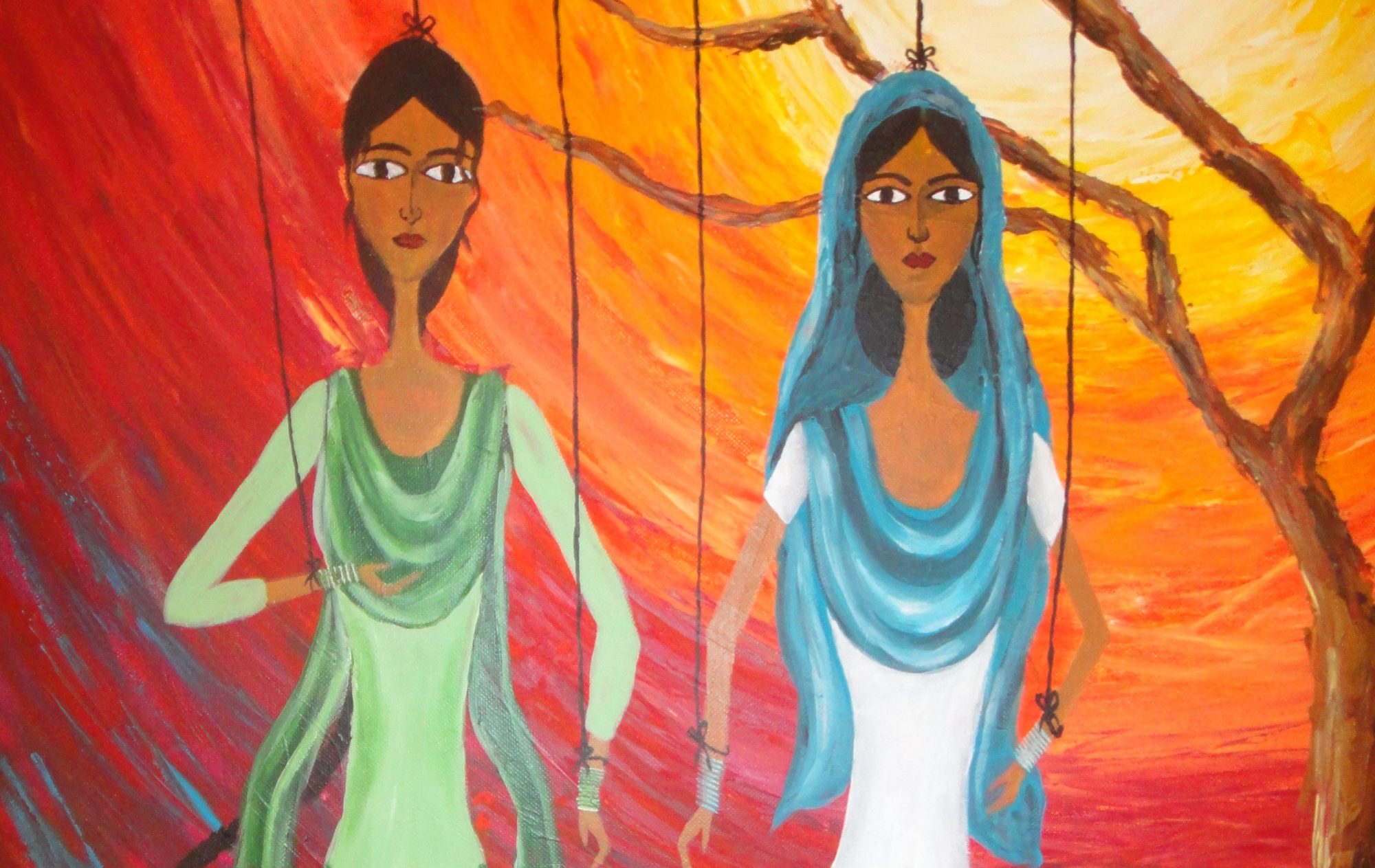 This is one of Navi Kaur’s paintings called,  “Bedai.” It captures the scene of when a bride leaves her home in the doli for her husband’s home.

Navi has been creative since childhood and she has been listening to her creative soul since ever since she was about 10 years old. Though she has had very little professional training, her paintings immediately speak to the viewer.  The bright colors and symbolism are captivating.

I asked her when she got into art and she said, “I honestly don’t remember when I started!” But she does have vivid memories of carrying around a sketchbook everywhere. “When I was little, like in fourth grade or so, I would carry around a sketchbook with me everywhere. I would draw random things like Mickey Mouse.  I would draw with whatever I could get my hands on.” 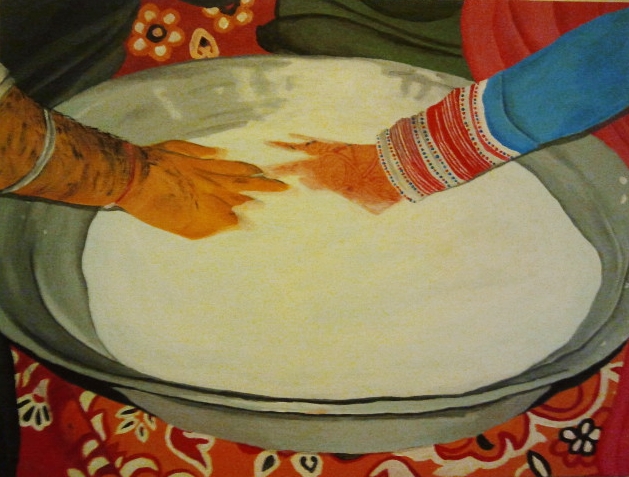 “This painting is called Kangna. It is a traditional Punjabi wedding game. In the time of arranged marriages, when the bride and groom didn’t know each other, the family would set up small games to serve as ice breakers after the wedding. Here is a bowl of raw lassi in which there is a ring which they have to find. It’s a game with so many emotions. It could be the first time the bride and groom touch. I like the idea of hands meeting,” Navi.

Later on in life, Navi called up on her aunt, who has a PhD in fine arts, for art instruction.  “She’s the only woman in my family who is into art,” Navi said. “I told her I thought her paintings were amazing and I wanted to see how she painted. So one day, she brought home an old canvas and had me paint some flowers from a newspaper clipping. I was so surprised I could paint! I had no idea. My cousin came home later and thought it was my aunt’s painting! That was the only painting lesson I’ve had.” 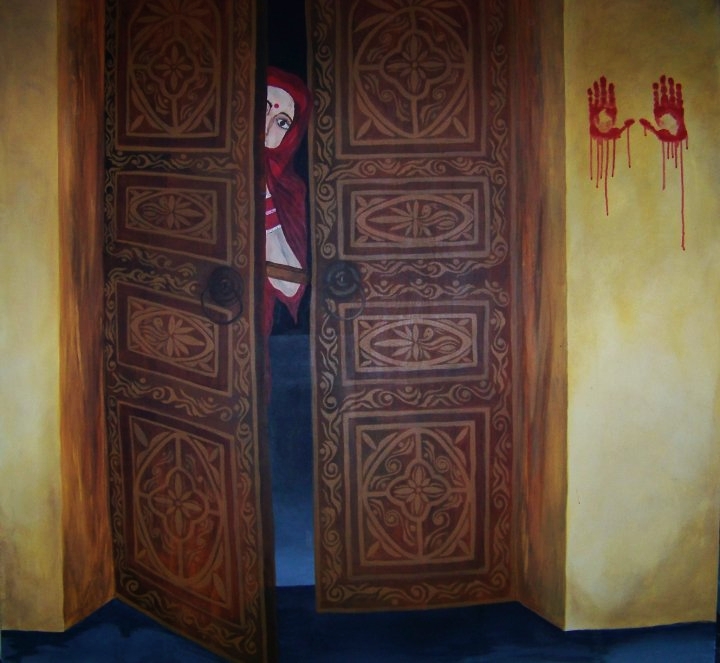 “This is called Uljhan. This painting is representing the women stuck in bad marriages. I’ve heard so many horror stories about bad marriages in India where women are forced to live with their husband who rapes them for example, but she has no other choice. Marriage is supposed to be happy but for many it is not,” Navi.

Now, as a full time nurse, Navi paints as a  hobby and focuses on themes of Punjabi culture and women’s rights. “My paintings reflect Punjabi cultural and feminism. You’ll see that a lot of my paintings have women in them. I have so many ideas of feminism that I hope to paint in the future. Punjab culture, like bright colors, the lifestyle, and the fabric also inspire me.”

Navi paints to bring awareness to womens issues but she also paints to relax. “It’s something that’s therapeutic. It keeps me at peace. When I’m stressed out or angry, I paint. It takes all the stress out of me. Beyond that, I don’t know why… I just paint.” She reflects that painting as a hobby is a luxury not available to most.  “I’m very lucky that my parents allowed me to purse painting as a hobby. They’ve spent hundreds of dollars on art supplies. Art isn’t cheap! But they’ve never stopped me.”

Eventually, Navi hopes to exhibit her art work somewhere public. “I’ve never sold my paintings, I’ve just given them away. It makes me happy to gift it to someone who will cherish it. I hope it brings them happiness. Sometimes I’ll randomly gift my paintings to people I find to be really sweet and nice.”

Her advice to Kaurs who want to puruse art: “If Waheguru has gifted you with the skill of art, don’t procrastinate! You have to find a way to express it! Your purpose is to spread color in this world. Even if you can’t pursue it as a career, that doesn’t mean you can’t do it on the side. If you have it, you are blessed!” 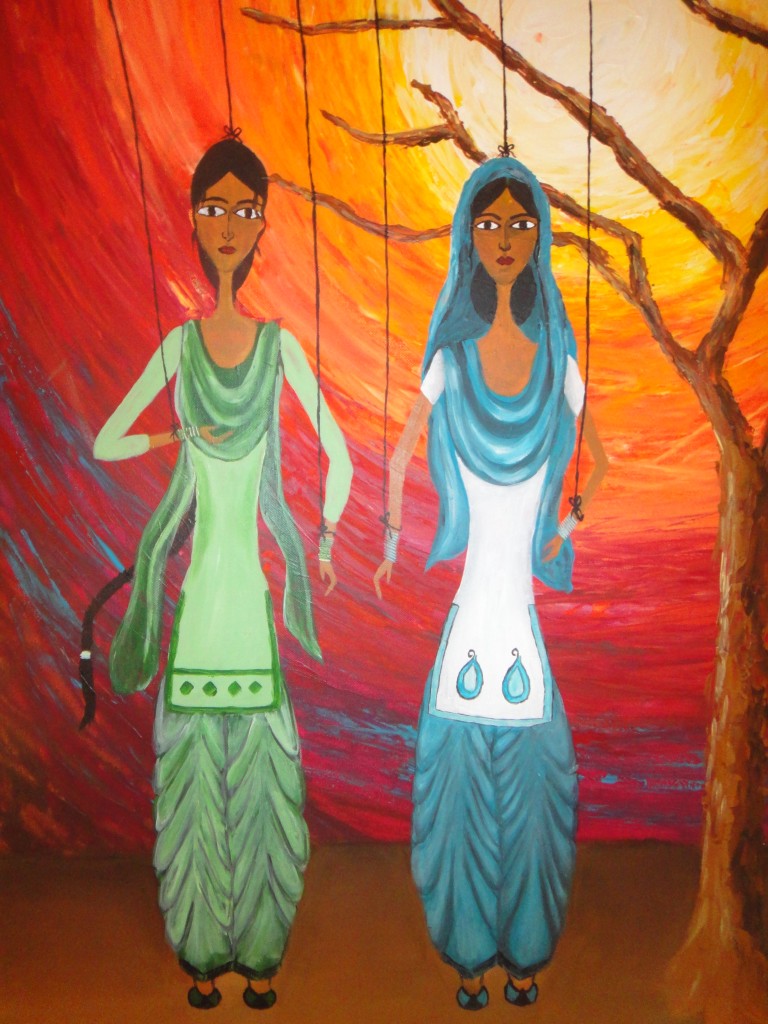 “Here in The Kathputli, you can see here the women’s limbs are tied like that of a puppet. It’s the idea that someone is telling you what to do, what not to do, here to go, what to study, here to live. It’s a painting about women who are stuck in a situation,” Navi. 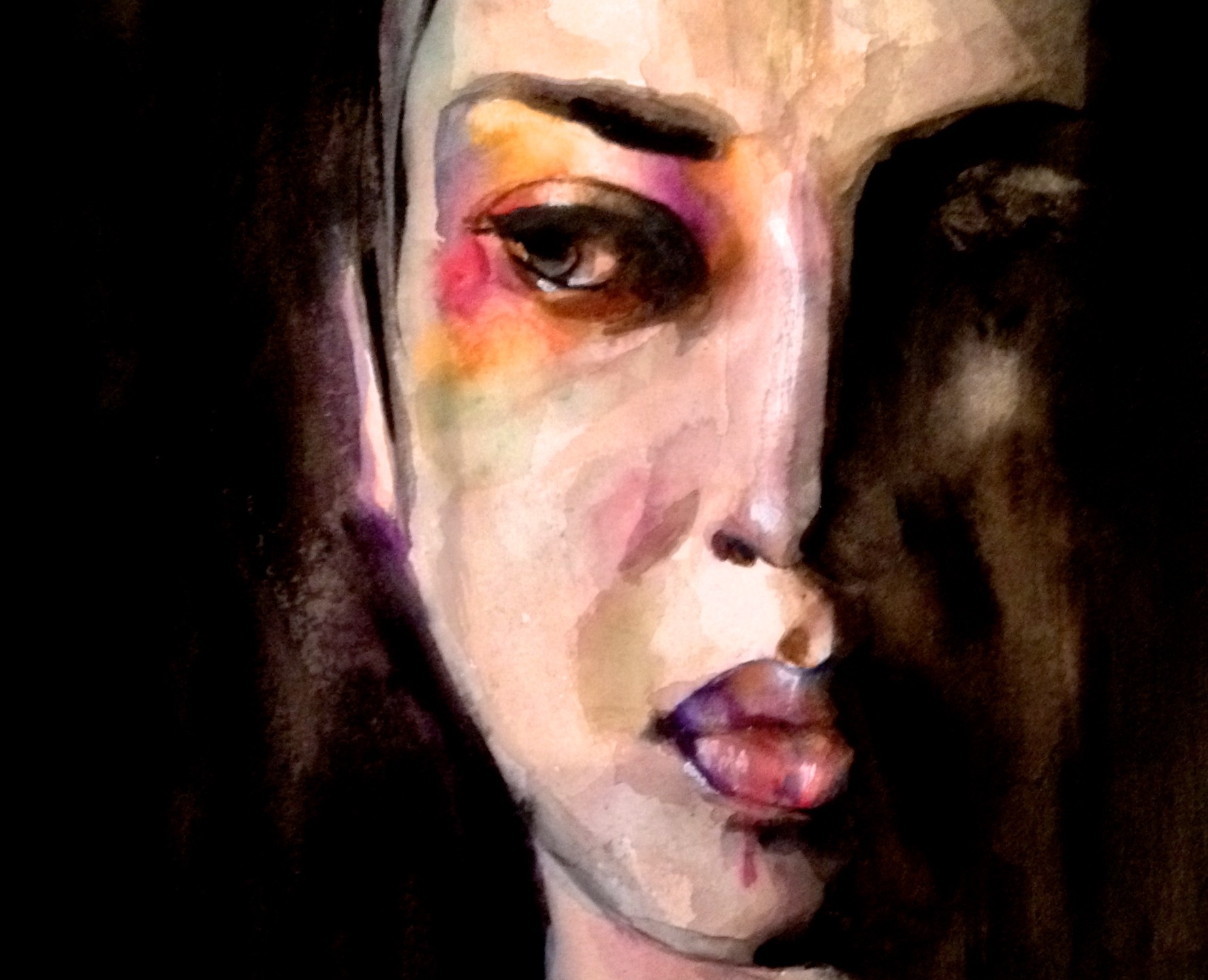 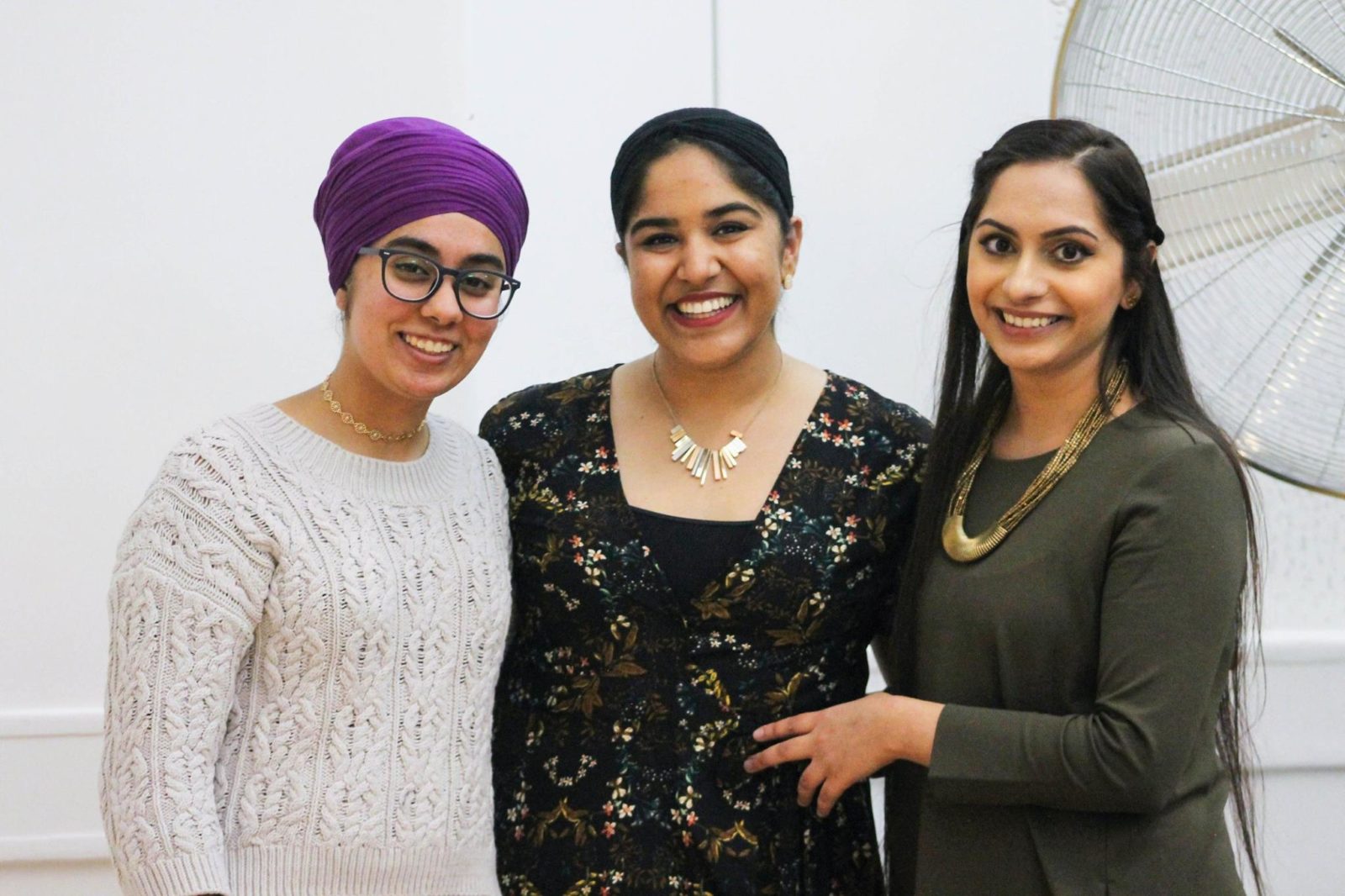 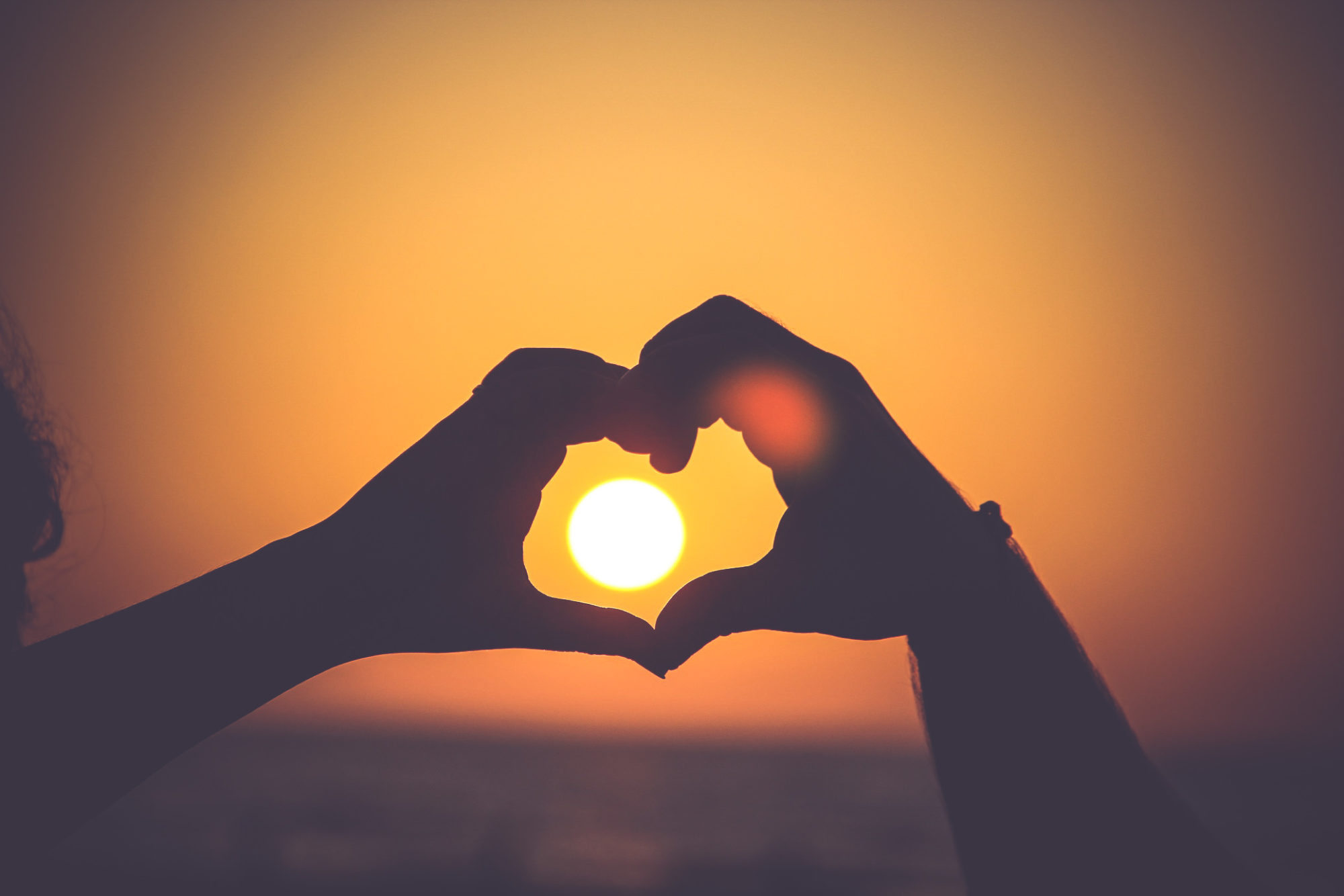 My Love, My Guru

She is Kaur: A Poem

Sometimes, do you ever wish you could go back in t

What photo could better capture the joy of being S

We've been posting about your & our favorite thing

Sangat! What a wonderful thing about Sikhi! ⠀⠀

Whenever inequality, hate, discrimination, or divi

Many of you said having the name and heritage of "

There are so many reasons to love Sikhi...like our