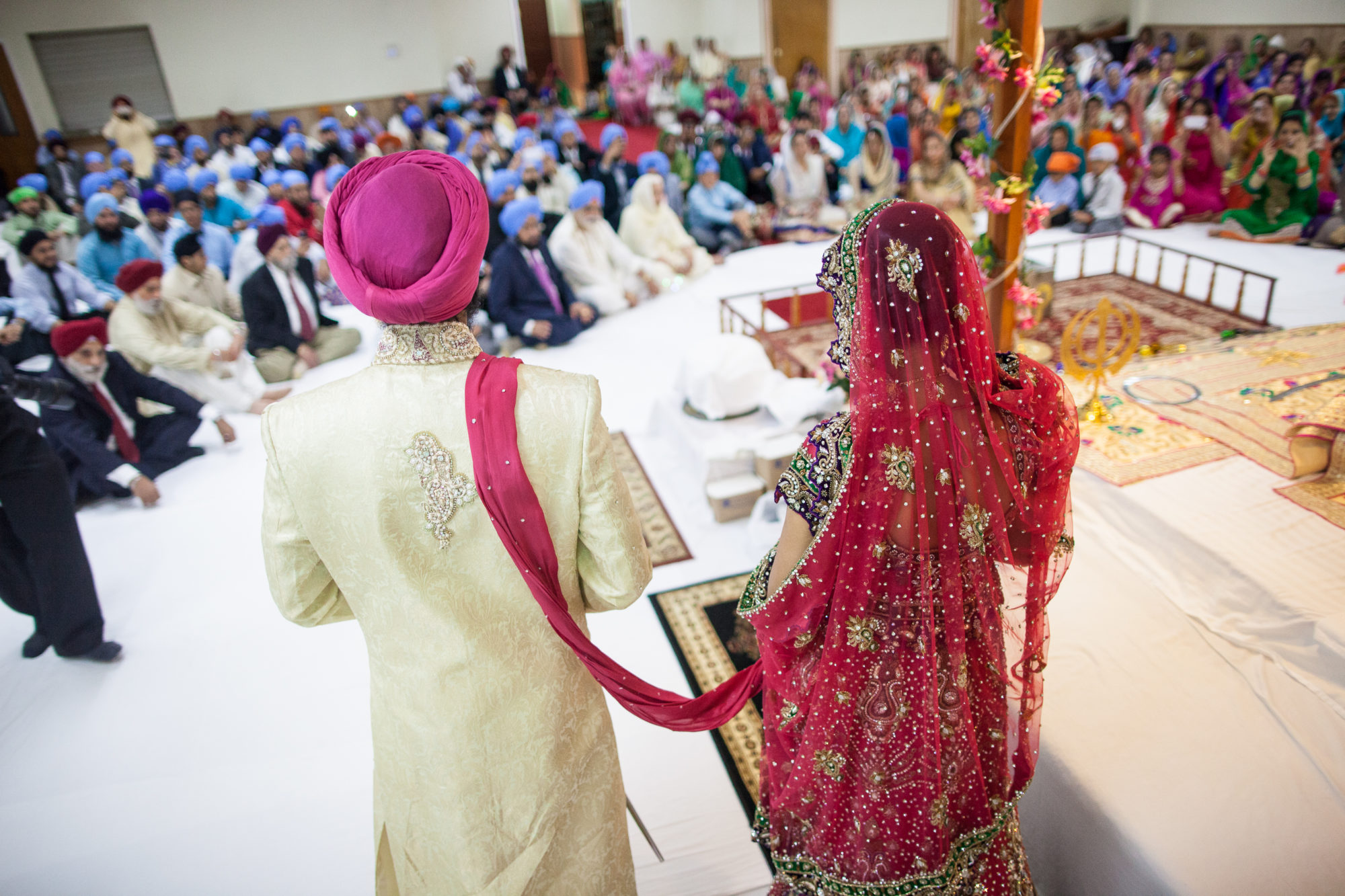 Planning a wedding can be stressful! Not only do you have to take into account your personal wants, but you have your fiancé’s wishes to consider too. Then you have to merge your parents’ vision with the vision your fiancé’s parents! Your extended family probably wants a say in how you plan your wedding too! It can get overwhelming.

Do you pick blue or pink as the main color? Do you get married in the summer or the winter? Who should you invite? Should there be a head table? Who sits at it? The result is usually a compromise.

That’s exactly what Shawn Singh Tucker and Baljit “Bally” Kaur Lehal did during their Anand Karaj this summer in Atlanta, GA.

“We walked side-by-side during our lavan,” said Shawn. 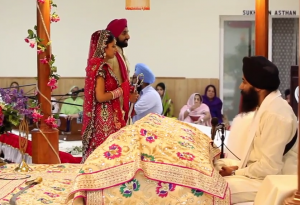 Someone would call this act unusual. Some would call it controversial while others might call it awesome. Regardless of one’s opinion, the bride-and-groom walking side by side around the Guru Granth Sahib (as opposed to the more common groom in front of the bride) is definitely an unconventional act.

“As a kid, when I watched my cousin sister get married, it didn’t make sense to me that the bride walked behind the groom,” said Shawn. “I wondered ‘If men and women are equal in Sikhi, like my parents keep telling me, why is it this way?’ From then on, I knew I wanted to try something different.”

“Before the wedding, Shawn told me he wanted to do the wedding differently,” said Bally. “He said, ‘If you want to get married, you have to do this one thing for me…you have to consider doing the lavan differently.’ ”

“I asked my naniji her thoughts and she told me that when she got married in the 1950s in Punjab, she and my nananji didn’t even walk around the Guru Granth Sahib. They sat during the whole Anand Karaj,” said Bally.

Shawn also did research on how other couples had done the lavan in the past.

“I read something about two Sikh women in a village who got married and I though to myself, ‘How did they do it?’ I also read that during an Anand Karaj in Delhi the guy went in front twice and then the girl went in front twice. This apparently caused a lot of strife and protest in the community but it made me think, ‘This is something I want to do now!’”

Ultimately, Shawn and Bally decided they would walk around the Guru Granth Sahib together, side-by-side. 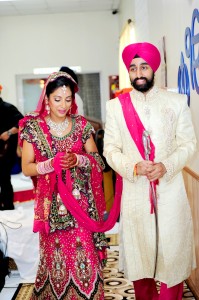 Deciding who was on the left and who was on the right was more of a practical issue. “It worked out better with the phulla if Bally was to my right,” said Shawn.

Shawn and Bally were compelled to walk side-by-side because of the visual indication of egalitarianism it portrayed.

“In Sikhi, marriage is one of the biggest public statements that you make. Sadly, in our society men always come before women; men are central and public. But in Sikhi, we are supposed to be equal so, it really bothered me that our most sacred religious ceremony put the man first,” said Shawn. “Plus, I’ve told all my non-Sikh friends that equality is a core Sikh value so if they were to see me walking in front, it would be really hypocritical. It would make no sense.”

“I agreed with what Shawn was saying,” said Bally. “I was really supportive of his thoughts. Many people said we couldn’t do it side-by-side because it’s against tradition, but doing something simply because ‘it’s tradition’ doesn’t make sense. You need to know the logic behind it.”

Bally added, “We never got anywhere by following the rules. Guru Nanak broke every norm and questioned everything. That’s how Sikhi came about, by challenging the status quo. So, why should we stop now? Why shouldn’t we question things that don’t make sense?”

But, Bally had a fear that walking side-by-side might make others upset. “The only thing I was worried about was the possibility of people in the sangat getting so upset that they would interrupt our wedding! I didn’t want them to ruin it!”

So, to mitigate that, Bally and Shawn notified all of their family that the couple was going to walk side-by side so it wouldn’t be a surprise to them. The family was also told that if anyone tried to interject in the wedding, they were supposed to take care of the interruption. “My boys knew what to do,” said Shawn.

Convincing their parents about this idea was a bit more challenging than anticipated.

“I had told my parents from a young age that I wanted a different wedding, but I don’t think they believed I was serious,” said Shawn. “My dad came to the USA at age 12 and has a pretty western outlook and my mom was born in the UK, so I thought convincing them would be a walk in the park. But, it wasn’t at all!” 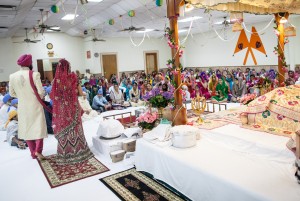 Shawn’s mother was worried about what others would say and preferred they do anything unconventional in a hotel rather than in a Gurdwara, “You’re going to be ridiculed,” she said. His dad felt similarly, “This is going to be a joke wedding.” After talking through it, Shawn’s parents said they would allow it if the head granthi at gurdwara approved. “I think they were banking on him saying ‘no,’” said Shawn.

“So, I went to talk to the bhai sahib and his response was, ‘You have a point. Walking side-by-side does make sense in terms of Sikhi.’ He told me that throughout Sikh history, the Anand Karaj kept changing and everyone would do it differently, so for uniformity, it was eventually codified in the Rehat Maryada. ‘But that doesn’t mean that the groom walking in front of the bride is necessarily the best way or the right way. In my view, as long as you walk around the Guru Granth Sahib, you can do it however you want,’ he said.”

“My parents still didn’t like they idea but they stuck to their word and let us go ahead with it,” said Shawn. “But it helped that my brother was vehemently supportive of the idea.”

Initially, Bally’s dad was also against the idea. “He said, ‘That’s not how it’s done.’ But once we explained to them reasoning, how walking side-by-side was a way to show respect to the bride and illustrate equality in a partnership, he and my mom appreciated the idea.”

The feelings that Bally and Shawn experienced while walking side-by-side during their lavan seemed to be unique to their situation. Very few Sikh couples can say they got to look at each other and smile reassuringly during their lavan. They went through the journey and committed to the Guru, side-by-side.

“I was nervous,” said Bally. “But I saw Shawn next to me and saw him smile, so it calmed me down. I felt less alone, it felt really good.”

“It was really nice,” said Shawn. “It was nice to check-in with Bally and whisper, ‘Are you okay?’ We were doing it together.”

After the wedding, the sangat’s reaction was overwhelmingly positive. 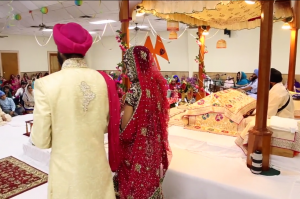 “Old aunties and uncles came up to us, wide eyed and said, ‘That was amazing! I wish we had gotten married that way!’ A few younger college-aged Sikhs said, ‘That was awesome. I’m gonna do that when I get married,’ ” said Shawn. “My parents, who were originally against it, saw everyone’s positive reaction and are now saying it was their idea!”

“Some said, ‘We loved what you did! It as amazing! Well done!’ People were really excited,” remembered Bally. “I’m really happy that we did it this way. I had a lot more fun and it was memorable because I could share it with Shawn.” 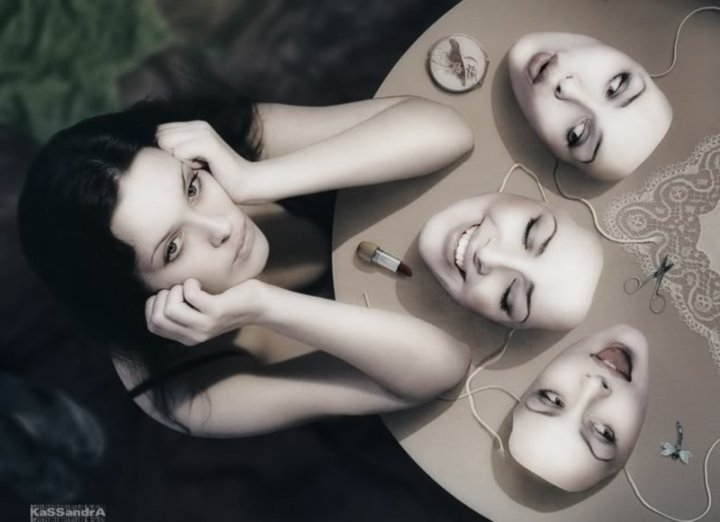 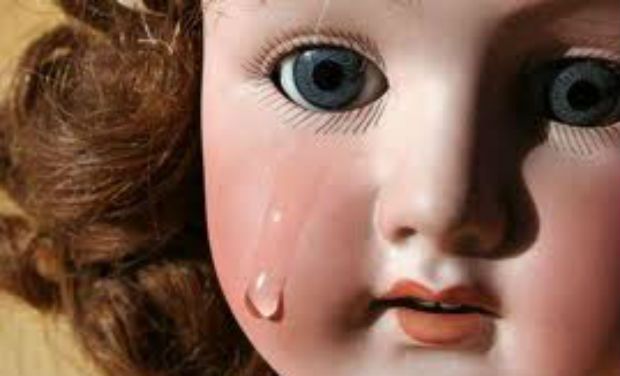 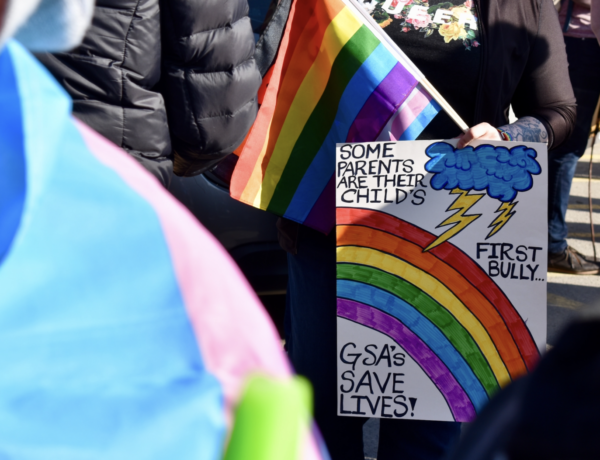 The Many 'Faces' of Rehras